We are now coming to the end of the current season, which included our very memorable Peter Craddock celebration concert, and we are looking forward to the next season, which brings new challenges, especially for HCO while Ferneham Hall is being refurbished.

The biggest challenge is falling audience numbers, which have dropped off even more this season than in recent seasons.  For the first two HCO concerts of this season (but not the last, which needed the piano), the orchestra moved down off the Ferneham Hall stage to be closer to the audience, and we received many positive comments both about the greatly improved presence and the excellent quality of the playing, but the audience numbers were still smaller than ever.

We are hoping to add a family concert by HSO next March which will help to spark children’s interest in live classical music.  We hope to have more details about that soon.

Another challenge is that the running of the orchestras is still heavily dependent on a small number of volunteers, many of whom are players, restricting their ability to help with other duties on concert days.  Please let us know if you can help!

A positive sign for the future is that several new players have joined the orchestras during this season, including some younger players.  We know they often have to leave again soon to follow jobs or look after family, but we hope that at least some of them will be able to continue with us and help the orchestras to thrive in the future.

In the meantime, we have a particularly interesting final concert of the season coming up, with five different works varying from the old familiar Wagner “Mastersingers” overture to the colourful Frank Bridge suite “The Sea”.  The final work,  Richard Strauss’s “Don Juan”, is exceptionally exciting and overwhelming for the listener and a hugely rewarding technical challenge for the players!  For more details, see the conductors’ notes overleaf.  Please bring along some new people to share the experience!

Our soloist Joo Yeon Sir will be talking with Stella Scott about the Prokofiev violin concerto.

After Wagner’s imposing Overture to his opera The Mastersingers, which will be conducted by our Bursary recipient, you will hear Engelbert Humperdinck’s delightful operatic gem - from his own opera Hansel & Gretel.  Humperdinck was one of Wagner’s pupils, who is really only known for Hansel & Gretel.  It is a perfect opera, in every way, and how Humperdinck achieved this, having written very little else - and precious little that has survived or is known - is nothing short of a miracle.  The Dream Pantomime, which you are to hear, starts with the famous Evening Prayer /Hymn, where the two children pray that fourteen angels will keep watch over them until the morning.

Our Concerto is Prokofiev’s first Violin Concerto in D.  It is a terrific work with, as you would expect, much virtuosic playing and fireworks from the soloist, who is on this occasion the wonderful Joo Yeon Sir.

Sometimes when planning concert programme one gets stuck for the right piece to fit in the right place; and on occasions one takes a gamble that pays off.  Some years back I did just this with Frank Bridge’s Suite “The Sea”. I didn’t know it all but when I started working on it and then rehearsing it with an orchestra it was abundantly clear that it was a neglected masterpiece.  I am confident you will thoroughly enjoy its four contrasting movements, all of them utterly different!  If you didn't already know, Bridge was Benjamin Britten’s teacher, and you will certainly notice influences and similarities, if only in the titles of the movements.  Just think Peter Grimes.

When studying at the Royal College of Music I, along with my fellow Conducting Class students, were lucky enough to have had Norman Del Mar as our teacher. Looking back on it I don’t think we really realised how lucky we were.  Norman was/is recognised as a Strauss scholar and there wasn't much about the great German composer that Norman didn’t know.  He wrote a three volume treatise about the man and his music.  Norman’s influence and passion for Strauss has definitely rubbed off on me – hence our concert concluding with Don Juan.  It is a fabulous piece of musical story-telling, with vivid and colourful orchestral sounds.  This is almost a first for HSO (previous performances being as long ago as 1969 and 2006) and they seem to have been having a lot of fun getting to grips with this complex work, so we hope you enjoy it too!

As always thanks for your support over the last Season.  Do keep coming and please tell your friends.  We love performing for you, so the more the merrier!  JB.

Reflecting on Wagner’s Die Meistersinger, Cosima Wagner wrote: “When future generations seek refreshment in this unique work, may they spare a thought for the tears from which the smiles arose”. Die Meistersinger in fact, was born during a very difficult period in Wagner’s life, not only including many professional disappointments, but also the loss of his first wife Minna.

But, despite all difficulties, Wagner was able to create a work of art full with national heroism, chivalric love and confraternity.  This, his only comic opera, is an ode to the late-medieval tradition of the minnesinger and meistersinger, members of the German guilds for lyric poetry and unaccompanied songs.

The overture of the opera is written in the form of a German march, a union of strains (melodic formulas) and a contrasting trio.  In this work the strains represent the different leitmotivs of the meistersinger during the opera, giving a special place to the love between Walther and Eva.  The strains in the opera are: the Meistersinger’s theme, Love’s theme, the Guild Banner motif, the famous Prize song, and the passionate Impatient ardour motif.  Wagner prepared a climactic concert version of the overture using a two-bar ending with three C major chords.

My approach with the orchestra has been to achieve a heroic sound with refreshing changes of mood that enrich the core essence of each motive.  The orchestration is extremely dense, so the main sound image that we are creating is one with a baroque approach to highlight the counterpoints, the different motives and the special harmonic changes, thus giving birth to an overwhelming sound of confraternal heroism.

Prokofiev - Violin Concerto no.1
Lisa Batiashvili, Chamber Orchestra of Europe, Yannick Nézet-Séguin
(c/w Violin Concerto no.2 and excerpts from “Romeo and Juliet”, “Cinderella”, and “The Love for Three Oranges”).  DG 4798529  £12.75.

Auditions for our next student conductor will take place from 7.00pm to 9.30pm on Tuesday 16th July 2019 at St Joseph’s Church Hall in West Street, Havant.

The AGM of the Havant and District Orchestral Society will be held at 7.00pm on Friday 6th September 2019 at St Faith”s Church Hall, The Pallant, Havant (now also known as The Pallant Centre).  All members of the Society (that is, playing members and season ticket holders) are invited to attend.

There are vacancies on the committee.  Nominations for election may be sent to the Chairman in advance (with the names of candidate, proposer and seconder) or submitted at the meeting. 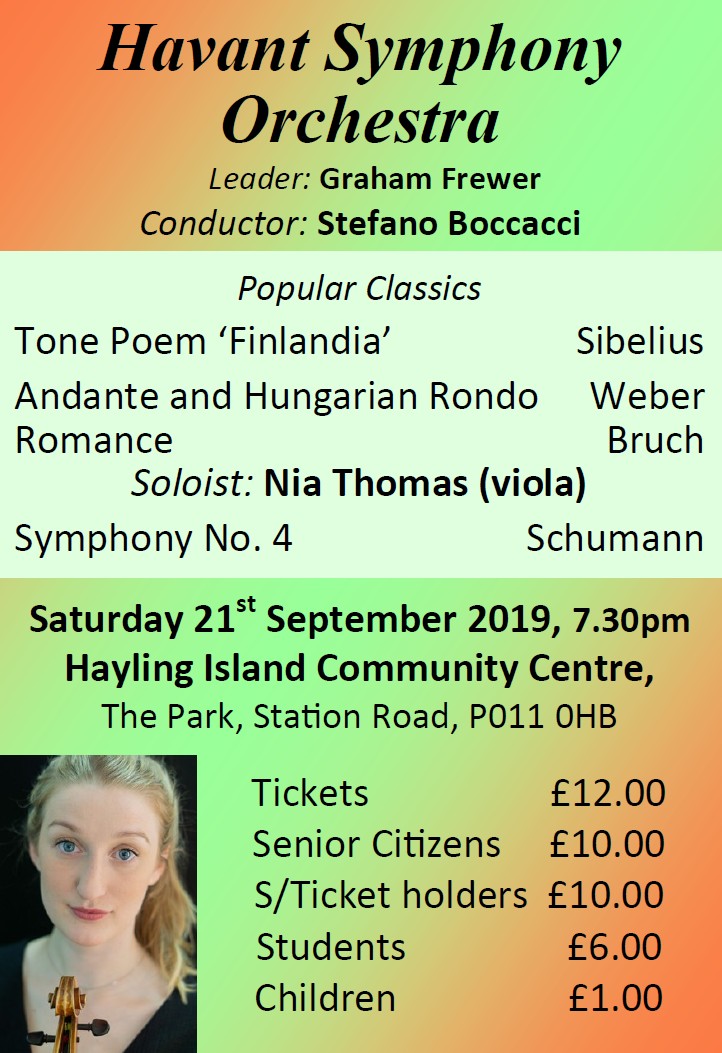 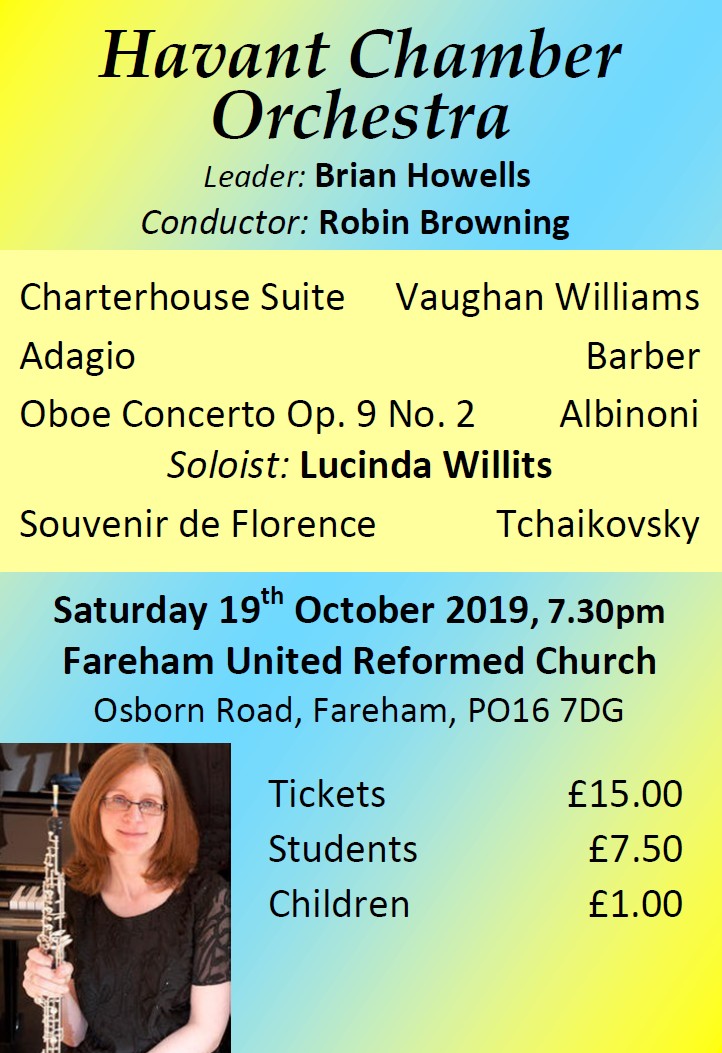