We are very grateful to everyone who helped with the inspiring and immensely enjoyable concert on 3rd March to celebrate our memories of Peter Craddock BEM, founder of the Havant Orchestras.  We are particularly indebted to former bursary conductors Mark Wigglesworth and Toby Purser for their part in planning and preparing the concert, but many others played critical roles in making it all possible, including our administrator Stella Scott and HSO orchestral manager Tony Gutteridge, who handled much of the complex task of contacting past playing members and other friends of the orchestras, as well as being one of the speakers at the event.

Tony and Stella can be seen talking about the orchestras on local TV channel “That’s Solent” in an interview recorded at the Saturday rehearsal.  The interview is also on the “That’s TV Solent” Facebook page, and shared on the Havant Orchestras Facebook page, which also has a new album of photos from the concert day itself, taken by Helen Taylor (HSO player and HADOS publicity officer).

The concert was on a Sunday afternoon, mainly for practical reasons involving the rehearsal schedule and venue availability, but we have had various comments suggesting that this might be a better time for at least some of our future concerts, so we are looking into this possibility.

We also took up a player suggestion that colourful floral displays, like those we used to have many years ago, would enhance the celebrations.  As arriving audience members wanted to see the flowers more closely, I moved them down from the stage – I hope that they were appreciated!  Again, we had subsequent suggestions that we should always have flowers, so we are considering whether that might be worth the extra expense.

Now that the celebration concert is over, we felt that a good way to ensure Peter’s name continues to be associated with the orchestras was to create the Peter Craddock Memorial Fund to contain the donations that enable the orchestras to develop and flourish.  See the separate information sheet (which was also made available at the concert) for more details.

Less than three weeks after the celebration concert, we now have our next HSO concert coming up.  A highlight of this concert is the tuneful Weber horn concertino, with outstanding soloist Ben Goldscheider, winner of the BBC Young Musician Brass Category final in 2016.

The concert opens with a delightful work which deserves to be much better known, the “Symphonic Variations on an African Air” by Samuel Coleridge-Taylor, which HSO conductor Jonathan Butcher will introduce in his pre-concert talk.

Before the horn concertino, our bursary student conductor Stefano Boccacci (who conducted the joyful finale of the Blower Symphony in C at the celebration concert) will be conducting three lively dances from Smetana’s opera The Bartered Bride.

After the interval, we have Dvořák’s ever-popular Symphony No 8 in G.

We had a larger audience than usual for the celebration concert, even in addition to our invited guests, possibly because of being a Sunday afternoon.  We hope that some of the new audience members who enjoyed that concert will join us again for this HSO concert on 23rd March.  Please encourage your friends to come along!

Before I write a few words about the upcoming concert I must say what a pleasure it was to be in the audience for the Peter Craddock celebration concert.  It was a splendid tribute to a man who gave so much to the musical culture of the district – and for so long.  It reminded me that on my first day at the Royal College of Music, when one of the other, apprehensive, ‘freshers’, with whom I first spoke, (as we wandered around in a somewhat overwhelmed state) told me that he lived in Emsworth and that he had attended many an HSO and HCO orchestra concert.  His name was George Hall and he went on to have a very successful career as a music critic/journalist etc. – working for the BBC for many years.  From the way he spoke it was clear that the Havant concerts had been important to him.  Of course, in those days, I didn’t even know where Emsworth and/or Havant were! Strange how things so often come full circle eh?  Anyway – a big thank you to all those who made Peter's concert such a success.  There was a huge amount of work involved, I know.

So why is this next concert starting with a work by Samuel Coleridge-Taylor, not to be confused with the the poet and writer Samuel Taylor Coleridge?  Well he is, as it were, my home town’s composer – i.e. Croydon.  We are very proud of him and sadly, because he died so young at only 37, he is so often overlooked.  Of course his most famous work is Hiawatha’s Wedding Feast, which he sold to Novello and Co. for a paltry 15 guineas – actually not so paltry back in the early 1900s.  However, though HWF is a most attractive work he wrote so much more, and some would say, of a higher quality.  The Symphonic Variations you will hear on the 23rd March come into that category, I believe.  They are genteel and elegant and abound with delicious tunes.  Incidentally, they can be found on Youtube, if you want a sneak preview?  A super recording by the Liverpool Phil.

SC-T, as he is so often called, was passionate about Dvorák’s music, unlike his close friend William Hurlstone, who insisted that Brahms was the greater man.  These two young students would often have friendly verbal sparring matches (comparing the pros and cons of both Dvorák and Brahms) as they travelled by train up to the RCM from West Croydon Station.  Hurlstone was another local Croydon boy, who also died tragically young – before he was 30.  You will hear much of Dvorák’s influence in SC-T’s music.  So – that’s why our concert ends with Dvorák’s terrific 8th Symphony – equally packed with memorable tunes, most of which are given to the ’celli.

The Bartered Bride Dances are included not only because they are lively, entertaining and foot tapping but because Smetana and Dvorák were fellow countrymen and they have much in common because of that.

The Weber? – well I thought it was about time we featured the horn as a soloist and this Concertino has a few surprises, which I think you will enjoy.  See you on the 23rd – I hope!

This year the world is celebrating Smetana’s 195th anniversary, and the Havant Symphony Orchestra decided to join the celebration of the composer who would be celebrating his birthday this month.

As a proper celebration the orchestra will perform the bursting, whirling and vigorously spirited dances from the opera The Bartered Bride.  These dances not only evoke a festive countryside spirit, but also bring to mind Czech costumes and Czech identity.  In fact, The Bartered Bride was Smetana’s core project to build a Czech musical identity.  And he did it not by narrating the great campaigns of Bohemian heroes, but by illustrating the essence of Czech countryside life, with its lore, its peculiarities and its own sound.

Each of these Bohemian dances, a Polka, a Furiant and a Skočná, has its own particular sound.  My approach with the orchestra has been to achieve a rustic sound, with heavy sforzandi and vigorous character, highlighting shifting accentuations while evoking poise, elegance and the pride of the people they represent.

Coleridge-Taylor – Variations on an African Air
Royal Liverpool Philharmonic Orchestra, Grant Llewellyn
(c/w Ballade in A minor, Butterworth's 'A Shropshire Lad', 'The Banks of Green Willow', and Two English Idylls, and MacCunn's 'The Land of the Mountain and the Flood')
Argo 4364012 £9.58 (download only)

Thanks very much to those who contacted us with suggestions about where to hold HCO concerts while Ferneham Hall is closed for refurbishment.

We hope to have the full details available as usual in time for our next season’s programme announcements at the May HCO concert. 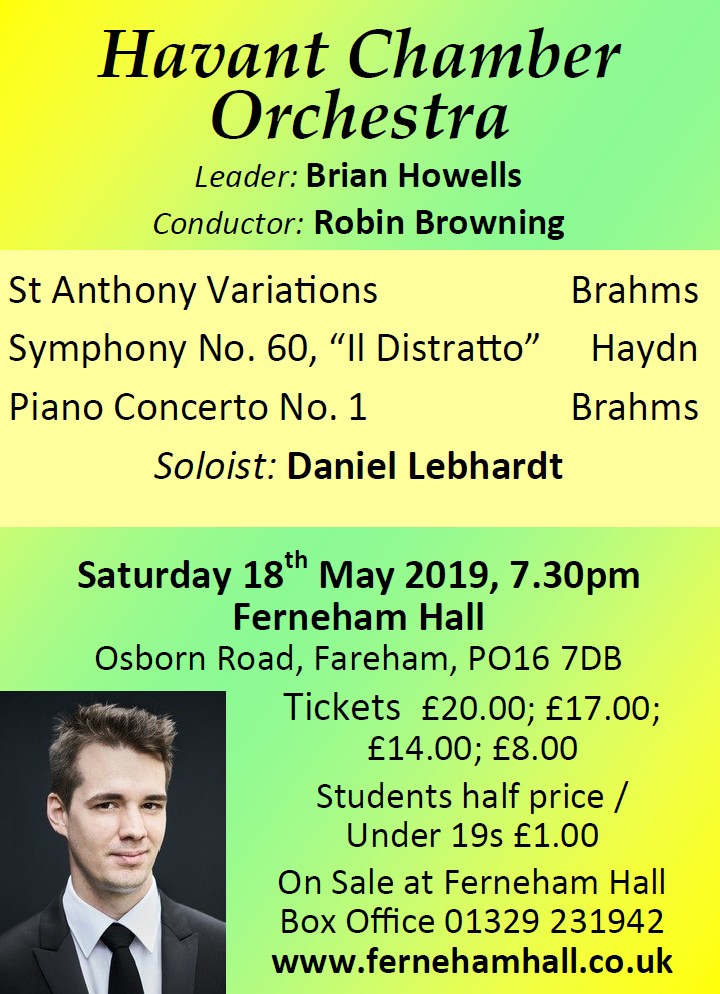