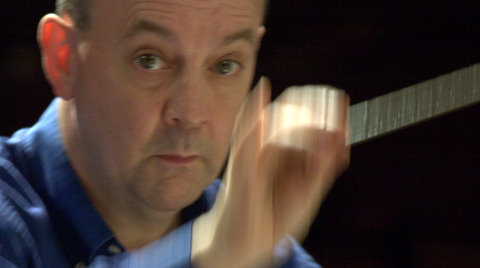 Jonathan Butcher is an experienced and versatile conductor, whose repertoire not only encompasses all the major orchestral, choral and operatic works, but also includes a large selection of 20th and 21st Century compositions and first performances.  He has a particular passion for the chamber orchestral repertoire and is much admired for his work with young people and students.

Jonathan conducted orchestras at the Royal College of Music for some twelve years and had, for many years, a happy association with the IAPS Music Courses for whom he was the conductor for their National Symphony Orchestra and National Chamber Orchestra for 18 years.  He was instrumental in the formation of the latter.

Whilst studying at the Royal College of Music, where he was awarded a Foundation Scholarship, he won all the major Conducting prizes, including The Sir Adrian Boult Conducting scholarship (on three consecutive occasions), The Arthur Bliss Prize and Leverhulme Studentship, which he utilised for further study at Tanglewood, U.S.A.

His teachers have included Leonard Bernstein, Jan Stulen, André Previn and Seiji Ozawa, but his major influence and inspiration was the great Strauss Scholar and recognised authority on the Orchestra – Norman del Mar.

Jonathan promoted two International Conducting Courses with Norman Del Mar as Director and in 1999 he organised and conducted a Tribute Concert to Norman held at the Royal College of Music.

On the lighter side he has conducted two Hoffnung Concerts in Munich and in 2004 Jonathan conducted several New Year concerts in and around Ludvigshaven, Germany.

At present he holds Musical Directorships with three Orchestras and is Artistic Director of Surrey Opera with whom he has conducted (and directed/designed) many acclaimed productions, which include Peter Grimes, The Turn of the Screw, Falstaff, Eugene Onegin, Carmen, La Boheme, Turadot, Madame Butterfly, Nabucco, Aida, Faust, Fidelio, Tosca, The Cunning Little Vixen, Macbeth and, more recently, a new production of Nicolai’s The Merry Wives of Windsor, which he also directed and wrote a, much acclaimed, new translation.

Other opera companies Jonathan has worked with include Opera 80 (now E.T.O.), with whom he conducted The Italian Girl in Algiers, New Sussex Opera – Il Trittico, Benevenuto Cellini and L’Elisir d’Amore.  Chelsea Opera Group – The Olympians and Court Opera – The Marriage of Figaro and The Barber of Seville.

In the genre of Music Theatre Jonathan has had a wide and varied experience, including Sweeney Todd and Follies, West Side Story and Phantom of the Opera at Her Majesty’s Theatre, The Haymarket.

First performances and works by twentieth century composers include Peter Maxwell-Davies – Violin Concerto, Roger Steptoe – ‘Cello Concerto with Alexander Baillie, Alan Ridout – Flute and Harp Concerto (World Premiere), Malcolm Williamson – Concerto Grosso.  Jonathan took the initiative in giving the second performance of Howard Blake’s Benedictus, which re-kindled new interest in the work, resulting in it establishing itself as one of the twentieth century’s major oratorios. He also conducted the first performance of Wilfred Joseph’s Overture – ‘High Spirits.’  He gave the second performance of Barry Russell’s ‘Town and Country,’ which was first performed at the 2002 Promenade concerts and he premiered a new song cycle by Marcus Barcham Stevens ‘Lost to the Beloved.’  Jonathan also gave the first public performance of the newly discovered ‘Air on a theme of Purcell’ by Gordon Jacob.

Jonathan has a natural gift and flair for communicating with audiences and is in much demand for conducting and presenting children/family concerts, which he also devises.  In 1999 he established the Family Lunchtime concerts at Polesden Open Air Theatre, working with such celebrities as Hannah Gordon, Angela Rippon, Johnnie Morris, Bill Oddie, Ian Lavender and Peter Purvis.  In 2009 he has been invited back to re-establish the Family Concert.

He has conducted many large choirs in all the major oratorios – Requiem’s by Britten, Mozart, and Verdi, The Dream of Gerontius, Belshazzar’s Feast, RVW’s A Sea Symphony etc. – down to small ensemble groups a capella.

Jonathan has conducted a concert at the Mansion House, London, in front of the Lord Mayor of London with Sir Trevor McDonald as narrator.

He was, for many years, Musical Adviser to the Robert Bouffler Music Trust who, under his initiative and directorship, promoted a number of opera projects for young people.

He was Artistic Director of Stonebridge Music and Conductor of the National Preparatory Schools Orchestra.  He is also one of the conductors for South London Youth Orchestras – SLYO.

Jonathan conducted performances, in Oxford, of Donald Swann’s exquisite, yet rarely heard, three act opera Perelandra based on the novel by C. S. Lewis.  These received much praise!

In 2012 Jonathan was the initiator and Artistic Director of the Samuel Coleridge-Taylor Centenary Festival in Croydon and during that year he conducted and promoted numerous concerts including the World Première of SC-T’s rediscovered opera Thelma.  It received much media attention.

This year, 2013, Jonathan will be conducting George Lloyd’s Iernin – another Centenary production.

Jonathan is a member of The Royal Society of Musicians.