Our first main HSO concert of this season is on a grand scale!

It opens with the energetic “Roman Carnival” overture by Berlioz, which will be conducted by our new bursary student conductor Avi Taler in his first concert with HSO.

The next work is the tone poem “The Swan of Tuonela” by Sibelius, in which the cor anglais solo is accompanied by a wash of background harmony, with the strings sometimes divided into 16 or more separate parts.

We then have the Dohnányi Variations for piano and orchestra, transforming a well-known tune into a set of dramatic and amusing contrasting episodes.

After the interval, we have the main work of the concert, Mahler’s first symphony, which makes use of twice our usual number of players for most of the woodwind, brass and percussion parts.  Fortunately, this is a work which players really enjoy performing, so we have been joined by many enthusiastic guest players for this occasion.  We hope we can find enough space for them all!

Since our last concert at Oaklands in July, the building containing the main hall (Romero block) has undergone significant refurbishment.  We are looking forward to seeing the results.  One change is that there is now a small servery on the far side corridor, which we hope to use to serve hot drinks, freeing up more circulation space in the foyer.  However, we have also heard that some repair and refurbishment work is not going to be finished before the concert, which may result in parts of the building remaining closed off, so we are hoping this will not cause any problems.

For the pre-concert talk at 6.30pm in the hall, Stella Scott will be talking to our piano soloist Florian Mitrea about the Dohnányi Variations.

My first experience of Mahler's first symphony was as a teenager, in the, now long forgotten, British Youth Symphony Orchestra.  I was playing 2nd or 3rd Trumpet I think?  Certainly not Principal!  The conductor was a rather round little man by the name of Trevor Harvey.  He looked a bit like a slightly plumper version of Robertson Hare, for those of you who remember the ecclesiastical sitcom All Gas and Gaiters? ’Though Trevor never said ‘Oh Calamity’, well not to my knowledge anyway.  We liked him very much and particularly the way he took he pullover off during rehearsals.  He would slip his arms out of the jumper, leaving the body of the garment still in place, then his arms would come out from under the jumper and he would then take it off, pulling it over his head.  All quite curious, but it amused us cheeky teenagers no end - and he always did it the same way.  Why he didn’t take it off before the rehearsal started one will never know.  As to his interpretation of the Mahler – I have no idea.  I was too young and really rather too concerned about getting the notes right and in the right place to give it much thought.  There was, however, an LP cut of the concert, so I might have a listen and see how Trevor does it?

Playing in the middle of a symphony orchestra is certainly a very good way to get to know a work from the inside.  So when I programmed it, with a youth orchestra I was conducting a few years later, half my preparation work was, more or less, done.  It was very brave of us to tackle a Mahler  symphony, but I think we made a pretty good job of it.  Luckily there was no LP or recording made of that performance to verify whether our efforts were good or bad.  Probably a good thing.  The Leader of that youth orchestra – the Sutton Schools Orchestra – is currently composing an opera  for me.  In fact he’s nearly finished it, so the Mahler experience clearly didn't do him much harm.  Anyway – it’s a magnificent four movement symphony and I'd be very surprised if you didn't enjoy every second of it.  It’s a fabulous piece to watch as well and listen to.

Programme planning is a pleasurable activity and there are all sorts of reasons why one arrives at a particular programme.  Let me explain – Mahler’s first Symphony requires two sets of timpani in the last movement.  Now there’s something to watch!  So – if you have two sets of kettle drums (timpani) available you must make use of them and what better work to partner the Mahler with that Dohnányi’s - Variations on a Nursery Tune.  It uses two set of timps as well!  Hurrah.  It’s a  wonderful contrast  to the Mahler, with many musical gags and parodies.  Our soloist is the brilliant Florian Mitrea – a soloist, yes, because the Nursery Variations are really a piano concerto and, no, I’m not going to tell you which nursery rhyme is used, but you probably know already.

We will also give you Sibelius’ evocative tone poem – The Swan of Tuonela.  But do read the programme note.  It will help your enjoyment of the piece.  It features the cor anglais a great deal.  An instrument that doesn’t often get such an extended solo.  This concert features two such opportunities.  Can you spot the other one?

I do hope you in enjoy this first concert in the HSO’s new season.  JB.

Berlioz’s ‘Roman Carnival’ overture was composed in 1844 based on materials and themes from his opera ‘Benvenuto Cellini’, and includes music from the carnival scene, and therefore is so called.  The piece is played in concert halls around the world as an opening number for the program, and its festive mood requires some technical challenges and a big orchestra.  It starts brightly with the main theme of the piece, abruptly interrupted by a slow sweet introduction, taken by a long sweet cor anglais solo.  Later, as the percussion joins, we can really hear the marching pace of the crowd down Rome streets.  When the music is fast again, we have action-filled chase music, moving between the strings and winds, from forte to piano.  Constantly intense, it shows some quite transparent moments and heart-beat-like fugato.

This will be my first time performing with the HSO as the Bob and Beryl Harding bursary holder, and I am very excited.  The rehearsals have been an educational experience, and it was great to see how the orchestra was committed to bringing out the nuances, orchestration gems and beauty of this piece.  I am very much looking forward to my debut, and for a grandiose opening to a great program.

As some of you will already be aware, we were very sad to hear that HSO trombonist Brian Terry passed away in August, little more than a year after being diagnosed with prostate cancer.  He was the longest-serving player in HSO, having been a regular player for more than 50 years, and was also the longest-serving HADOS committee member by far, having been on the committee for more than 35 years.  He took on the task of looking after the Bob Harding Bursary fund, and from 2007 he also took over the vital role of Hon. Treasurer.

After his diagnosis in 2018, he informed the committee and arranged to step down as treasurer at the end of the season to enable a smooth handover while he was still available to help.  Unfortunately, he fell ill shortly before what was supposed to be his last concert with HSO in July 2019, so was unable to be with us, and although he pushed himself to play in one more concert (with the Charity Symphony Orchestra) he slipped and fell badly just before the concert.  He somehow managed to play in the concert anyway, but the cancer meant he was unable to recover and passed away a few weeks later.

His supportive and friendly approach and his wisdom and experience were hugely reassuring to the current committee and we miss him very much.

We are dedicating our HSO concert on 7th December to our friend Brian Terry and all that he did for the society. 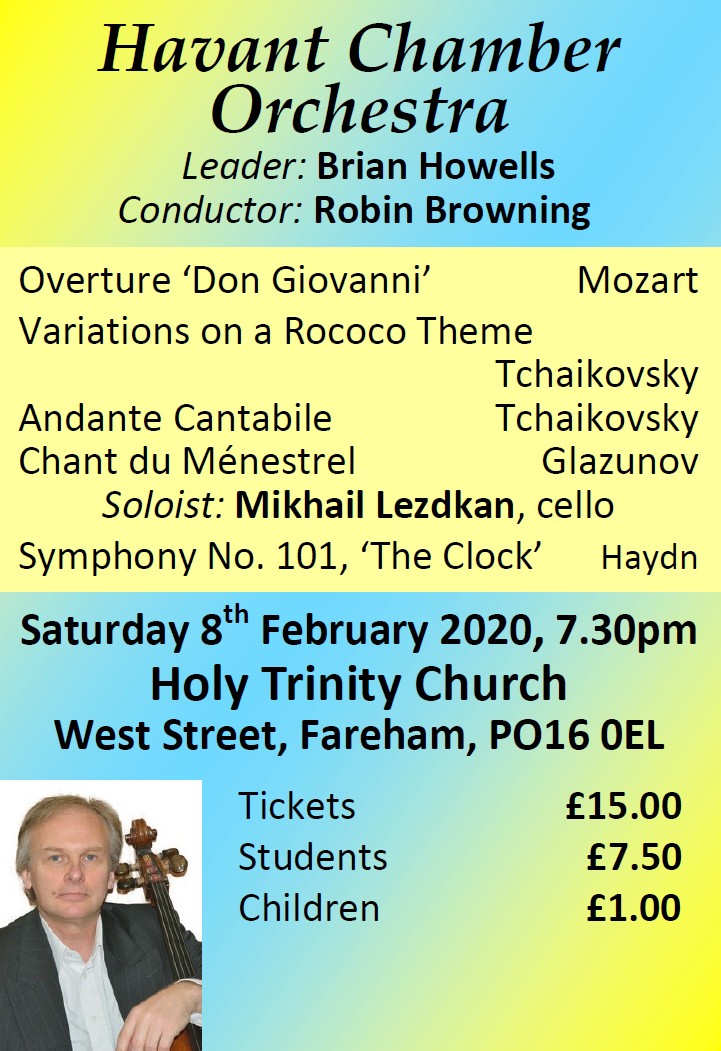 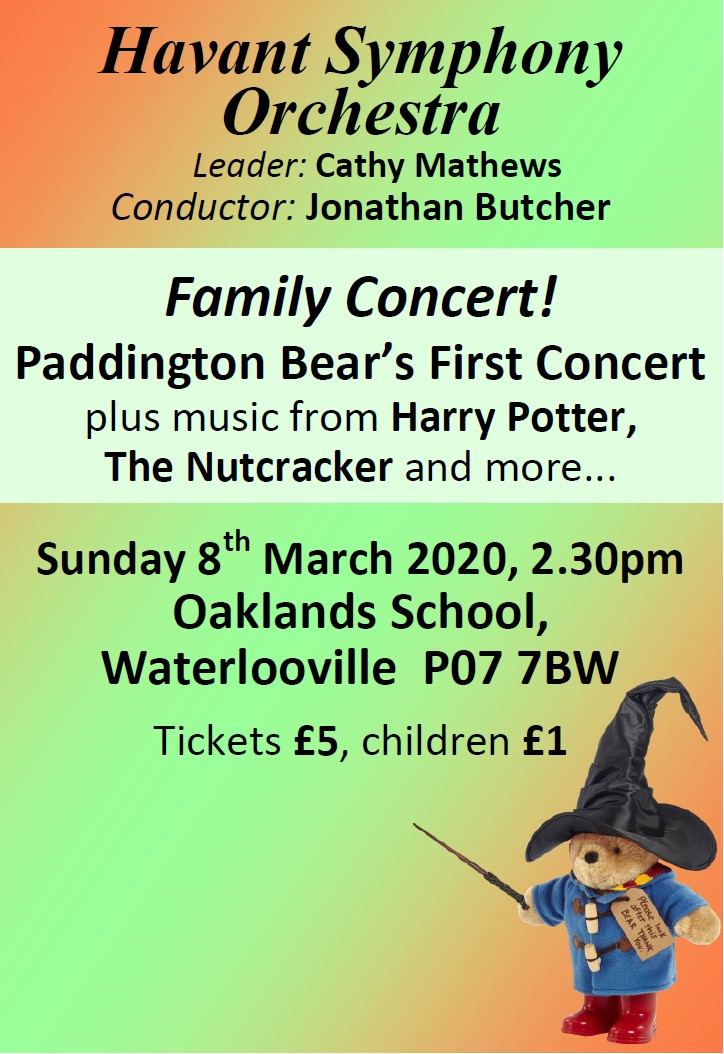