Welcome to the 2019-20 season of the Havant Orchestras!

Ferneham Hall is preparing to close for a couple of years for major refurbishment, so Havant Chamber Orchestra has had to find various alternative venues for this season.  We have chosen three separate venues in order to compare and contrast alternative possibilities.

Our first concert is at Fareham URC Church, which is in Osborn Road South, conveniently only a short distance from Ferneham Hall.  The church is a cosy modern venue with cushioned chairs, but it is quite small, so we are having a strings-only concert to limit the space required for the orchestra, leaving space for a maximum audience capacity of 160.  We hope this will be enough, but if you may need more tickets, we strongly recommend booking them in advance (as described on the handbills) as we cannot guarantee that tickets will be available on the door.

The other work, Albinoni’s delightful Oboe Concerto in D minor, is No. 2 of a set of 12 assorted concertos Op. 9, and is probably the best-known work which is definitely by Albinoni (unlike the famous ‘Albinoni Adagio’ published by Giazotto in 1958, claimed without evidence to be based on a fragment by Albinoni).

We are looking forward being immersed in the rich sound of a string orchestra in this more intimate venue.  Please let us know afterwards what you think of the concert, as we soon have to choose which venues to use again next season.

Conductor Robin Browning will be talking about the works in the concert with Stella Scott.

We recommend taking seats at or near the front so that you can easily hear the speaker.  If you miss the start, please feel free to enter quietly.

We are not planning any pre-concert music at this venue as it does not appear to be practical to use the same room for the pre-concert talk and music.

Stella Scott has been talking to Robin Browning about the concert.

For our upcoming HCO concert we’re going for a strings concert.  This was decided mainly for practical reasons, but does it have any artistic merit do you think?  Do you enjoy the string sound or do you find it a bit limited?

It’s not limited in the slightest!  Quite apart from consisting of some of the greatest repertoire written for any combination of instruments, ever, the soundworld combines two inter-related properties.  On the one hand, it’s the most homogenised group of instruments in the standard orchestra.  In other words, all of them produce similar sounds in a similar way, more so than any other group.  Yet alongside this pleasing quality, there exists a vast variety of colour and expressive possibility.  Souvenir de Florence explores both of these qualities in real depth – the concurrently blended yet extremely varied sound – to a potently dramatic level.

The programme contains quite a wide range of styles with Albinoni standing out amongst more romantic composers.  As a violinist yourself, do you think the baroque style is more difficult than the romantic for string players?  How tricky is it to do both in one concert?

It can be pretty tricky for players of all standards to switch from one playing style to another.  For a string player, if one plays baroque music with an attention to historical practice, it is a totally different way of approaching the instrument and the sound compared to, say, the string sound in Tchaikovsky.  And that’s before one makes choices about ‘authentic’ bows, strings, and tuning.  In HCO we don't go as far as the latter, but we do aim to perform any baroque music with an awareness of good style, meaning we must all remember to press the “reset” button when working on more romantic repertoire.  Playing baroque music isn’t any more or less challenging than romantic or contemporary repertoire, but to play it well does require an open mind and awareness that takes time during rehearsal.

Have you worked a lot with Lucinda, our oboe soloist?

Yes, I’ve worked with Lucinda many times over the years, primarily as an orchestral principal (and also very fine Cor Anglais player).  She’s a superb, musical and refined player, and collaborates very well with those around her.  I’m really looking forward to working with her as a soloist on such a subtle and beautiful concerto.  Accompanying an oboe soloist is always a tricky thing for any conductor, too, because one has to be hyper-aware of how they’re breathing and how much space they may sometimes need to produce that incredible sound.  Lucinda will be brilliant, and I can’t wait to hear it.

The major work in the programme is the Souvenir de Florence by Tchaikovsky which is really chamber music – for string sextet.  Do you think it will work well in this arrangement?

It’s a true masterpiece.  Going back to my opening point, about string repertoire in general, it sits in amongst a multitude of other great string works.  There is something about how a composer approaches the sound of a string group that lends works to being re-scored for larger forces, without distorting the original in any way – in fact sometimes adding to it.  Souvenir de Florence could be a case in point.  Personally, I prefer the sextet version of Schoenberg’s ‘Verklärte Nacht’, and I don't think Mahler’s famous scaling-up of Schubert’s ‘Death and the Maiden’ quartet works as well as the original.  But this Tchaikovsky works, to my mind, equally well in both versions.  It’s such a superb piece of virtuoso string-writing, how could it NOT work?!  Tchaikovsky’s palette is often crying out for a large canvas, and here he paints with such vivid texture that there should be no doubt for the listener! 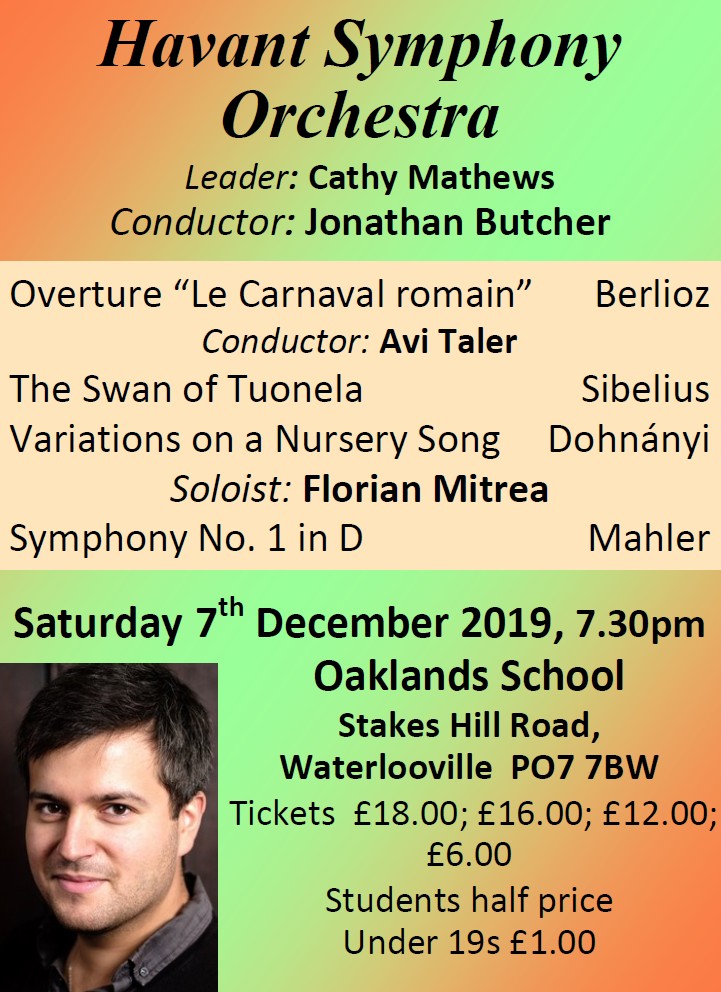 Other musical events involving players and friends of HCO

The design includes a higher capacity main hall (800+), improved accessibility, additional separate rooms (studio and meeting room) and a new two-level foyer area with facilities to prepare food as well as drinks.  There are still some details to be resolved, but it appears likely that the council will proceed with this design or something very similar to it, so Ferneham Hall will close completely from January 2020 for two years as previously planned.

The design includes the following note:

Note the acoustic does not support drama without amplification or good performance of classical music.  These are as existing.

For the orchestras, the new design does not therefore appear to provide any obvious benefits, and we are concerned that hire costs are likely to increase when transferred to a commercial operator, so it is not even clear whether we will want to use the new venue when it reopens.  We also need to continue to use alternative venues at least for next season (2020-21) and possibly part of the season after that.

None of the venues we have found in the Fareham area have raked seating, and the most comfortable venue, Fareham URC, is too small for the full chamber orchestra.  We are therefore considering alternative venues in the Havant area instead for next season, including Oaklands School or Park Community School, but we realise those might be too far away for some of our existing audience members in the Fareham area.  If you have any suggestions on what to do about this, please let us know!