Last weekend, we had our first family concert for many years, funded by the Peter Craddock Memorial Fund.  It was far more popular than we had anticipated, having sold out well in advance, and it seems to have been greatly enjoyed by the hundreds of children and also by the players!  Jonathan Butcher has written up the experience from his point of view in this newsletter and we hope to have more such events in future.

After such a memorable event, it’s easy to forget that we have our next HSO concert coming up imminently.  And we are nowhere near sold out so far, so please bring lots of friends along with you!

We will be starting with John Ireland’s ‘A London Overture’, which illustrates various scenes around London in assorted musical styles.

Next, we visit Norway for Grieg’s Peer Gynt Suite No. 1, including the delightful ‘Morning Mood’, finishing with the rising tension from tiptoes to terror when the hero is surrounded by trolls ‘In the Hall of the Mountain King’.
We included this exciting finale in our family concert as well.

The last work before the interval is Dvořák’s symphonic poem ‘The Noon Witch’, one of a series of works based on scary local myths and legends which he wrote after returning to Bohemia.

After the interval, we have the Elgar violin concerto, played by rising star Charlie Lovell-Jones.  The concerto is on a grand scale, and forms the whole second half of the programme.

P.S. We hope the concert will go ahead normally despite the coronavirus fears, but if we have to cancel or postpone the concert we will put a notice on the website, inform all season ticket holders by email or phone and send an email to anyone who bought tickets online.  Tickets will be refunded if necessary.

Stella Scott will be talking to our violin soloist Charlie Lovell-Jones.

Yesterday afternoon the HSO presented its first Family Concert for quite a number of years and I think we can say, with confidence, that it was a resounding success!  Early afternoon several hundred children, their parents and grandparents etc. descended happily on Oaklands School, Waterlooville.  Children and adults could try their hand at all sorts of musical activities from conducting to drumming and trying their hand at a variety of instruments which were on offer. There was a fantastic family atmosphere and it seemed that no detail had been forgotten to make the afternoon go with a musical swing.  The theme of the concert was the famous bear Paddington and, as you can imagine, bears were in attendance in great numbers.  In fact there might even have been more bears at the concert than humans, though every seat in the Oaklands wonderful auditorium had been sold several weeks before the concert.  I should add that all these extracurricular activities were a bonus and happened prior to the actual orchestral concert itself.

When the official concert started the youthful audience were entertained with a huge variety of music, including works by Bizet, Grieg (conducted by our Bursary recipient Avi Taler), Elgar, Tchaikovsky and some film music by the ever popular and brilliant John Williams.  BUT - the main event of the afternoon was the performance of Michael Bond and Herbert Chappell’s Paddington Bear’s First Concert.  It’s a glorious piece, which I was allowed to narrate, and tells the story of Paddington’s arrival in London, being ‘adopted’ by the Brown Family, meeting Mr Gruber and finally being taken to a concert at the Royal Albert Hall, where Paddington is distressed to learn that Schubert hadn’t finished one of his symphonies.  All turns out well in the end ’though, and Paddington is allowed to conduct his own tune with the entire audience all joining in with great gusto, which they certainly did at Oaklands.  Wow – what an  afternoon and huge thanks to everyone who made it such a wonderful experience.  We hope it will have ‘sown a seed’ for the many young people in the audience (and maybe the not-so-young as well) to not only go to more concerts but hopefully, to take up an instrument.

I should add, by the way – that’s if you were wondering – yes, marmalade sandwiches were available and were devoured pretty much instantly, while the Ice Cream Man could barely, or should I say bearly, keep up with demand!!!

Watch this space or any other HSO publicity, online or otherwise, for more information about out next Family Concert, which I hope I can say, with assurance, will happen.

I am very happy to conduct my second term concert with the Havant Symphony Orchestra.  The orchestra members have been very kind and friendly to me, and despite the long journey, I am always very pleased to arrive and rehearse with them, especially working up to our recent family concert (which was SOLD OUT!), in which I conducted a narrated piece, narrated by Jonathan Butcher, HSO's musical director.  This brought up new challenges for me, and forced me to deal with skills and techniques I had not have the opportunity to practice: flexibility in time, extremely clear beating, following the narration but keeping everything moving at all times.  The players in the orchestra showed a high level of proficiency and concentration and did all they could to help me do my job well and easily.  I really enjoyed this special experience in the family concert.

For our spring concert I will be conducting the magical first suite of Peer Gynt by Norwegian composer Edvard Grieg.  The music was composed for an original play depicting the journeys of the fairy-tale hero Peer Gynt around the world.  Grieg picked out two suites of favourite numbers, some of which are world wide most popular classical moments.  It starts with Morning Mood which nowadays we easily relate to a Scandinavian chill foggy morning, but originally it was Peer Gynt who woke up to a morning on the desert!  Åse’s Death is a serene lament for the death of Peer's mother.  Anitra's dance takes us to a sensual dance of temptation by the Bedouin chief's daughter, who eventually robs Peer and leaves him without his money and jewels. The suite concludes with the celebrated In the Hall of the Mountain King which introduces a dream-like scene where a feast hosting gnomes, trolls and goblins are celebrating wildly. 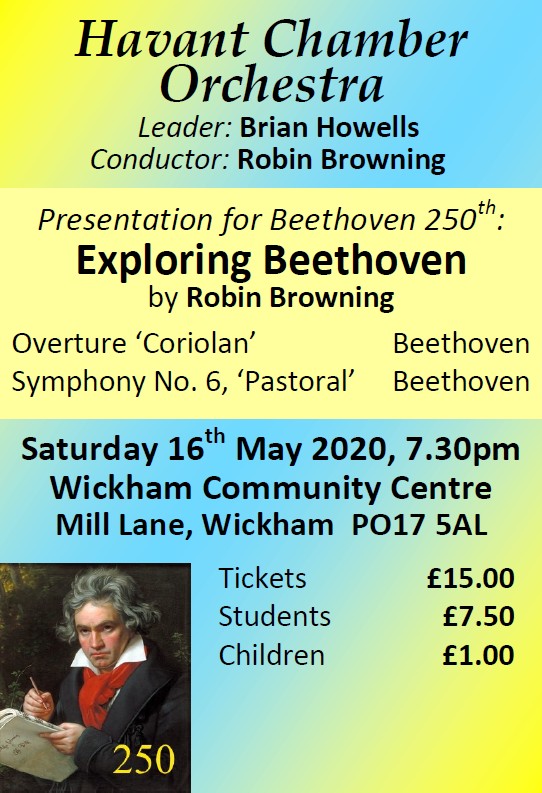 On Sunday 7th June, at 3pm, Havant Symphony Orchestra has been  invited to perform an afternoon charity concert of light Viennese music (including Strauss waltzes such as the Blue Danube) at Titchfield Community Centre to raise funds for Macmillan Cancer Support, who are organizing the event.

The community centre is a small local venue (audience capacity about 100) so we will be using fewer string players than usual, and we have to minimize costs for players and rehearsal time so this is not intended to be a major event.  However, we hope that plenty of people living near the Titchfield area will take the opportunity to attend and support the charity.  Further details will be included in our next newsletter.