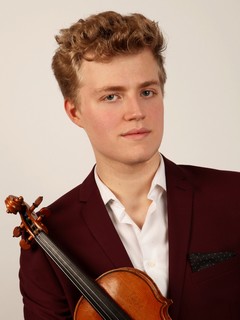 Charlie Lovell-Jones, a 20-year-old violinist from Cardiff, has been described as one of the most promising young violinists in the UK.  Since his Royal Festival Hall debut at 15, Charlie’s solo engagements have included appearances with the BBC National Orchestra of Wales, the RTE Concert Orchestra in Dublin and the English Chamber Orchestra.  His live recording of The Lark Ascending with BBC NOW was broadcast on Radio 3.

Recently pre-selected for the Sendai International Violin Competition, Charlie is off to Japan to compete this summer.  Nearer home, Charlie has won numerous prestigious competitions for instrumentalists in Wales and the UK, including the coveted Blue Riband Instrumental Prize at the National Eisteddfod.  He recently performed the Mendelssohn, Britten and Prokofiev Concertos and has been invited to perform Peter Maxwell Davies’ Concerto in London.  He is much in demand as a recitalist and enjoys talking to his audiences about the music he performs.  He plays with the renowned John Wilson Orchestra, including prom concert performances of West Side Story and Oklahoma.

With the support of Cardiff City Council and the Welsh Livery Guild, he regularly studied at the summer at the Cambridge International String Academy, working with such international violinists as Ida Haendel and Yuzuko Horigome.

Until July 2017, Charlie was a pupil at the Welsh-medium high school Ysgol Glantaf in Cardiff, where he passed his A Level Music with full marks three years ahead of his age group.  He is the youngest ever person to have received the Composer’s Medal for Under 25s at the Urdd Eisteddfod.  Following this, BBC NOW approached Charlie to write a piece for the orchestra with solo violin and soprano.  The resulting tone poem, titled “Cariad Cyntaf” (First Love), was premiered by BBC NOW, with international soprano Rebecca Evans and Charlie at St David’s Hall as part of a St David’s Day celebratory concert.

Since October 2017, Charlie has been studying Music at Christ Church, Oxford, where he is an academic prize scholar and he holds the William Ewald performance scholarship.  Charlie is also Music Director of the Oxford University a cappella group ‘The Oxford Commas’ with whom he has toured the North East Coast of America.

Charlie learns with the eminent violinist Rodney Friend, former concertmaster of the London and New York Philharmonic Orchestras and the BBC Symphony Orchestra.  He currently plays an important Italian violin made by G.B. Guadagnini, from the distinguished firm J and Arthur Beare, loaned to him by a generous benefactor.