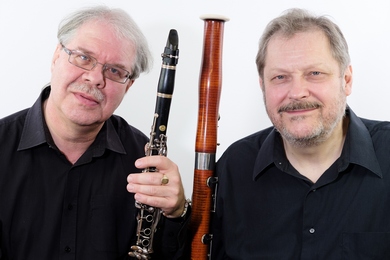 Robert (Rob) Blanken was born in Rotterdam and came to England at the age of 10.  Soon afterwards he began to learn the clarinet with David Leverton and later became principal clarinet in the Hampshire County Youth Orchestra.  He studied at the Royal Northern College of Music with Neville Duckworth and Sidney Fell gaining his GRNCM and later a performer’s diploma from the Royal College of Music.

Rob’s repertoire includes concertos ranging in style from Stamitz to Artie Shaw.  He plays most of the chamber works for clarinet and has a reputation for excellence – especially in the Monington Duo with pianist Karen Kingsley.  Their duo repertoire numbers over 200 works, including several specially written for them.

Rob is principal clarinet in Havant Chamber Orchestra, Solent Symphony Orchestra and numerous chamber ensembles.  In addition to these commitments, he plays clarinet and saxophone in theatre productions throughout the South, the Anemos Wind Quintet and Ensemble Concertante (Clarinet Quartet).  He teaches clarinet at Portsmouth Grammar School and saxophone at South Downs College.

Richard is one of those musicians for whom music and mathematics are intimately intertwined.  He studied pure mathematics at Hull University then on graduating he took a position as a software engineer.  In parallel he embarked on several years of advanced tuition on the bassoon, at first under the auspices of John Orford then under William Waterhouse.  In 1989 he became a member of the London based reed trio ‘Ventelation’, which enjoyed a number of successes on the concert club scene.  He was also active at that time performing in a recital duo with Karen Kingsley.  Richard and Karen joined forces with Robert Blanken to form The Anemos Trio, which is still active.  He is currently the regular principal of Havant Chamber Orchestra and Solent Symphony Orchestra; and is the regular contra player for the IOW SO.

Richard is a frequent concerto soloist.  Of interest are the recent performances with the Havant Baroque ensemble (players from HCO strings) of two of the Vivaldi concertos; and with the IOWSO, the bassoon concerto by Christopher Headington, a composer whom he met many years ago when the Havant Symphony Orchestra performed Headington’s violin concerto.  Richard has enjoyed long association with Anthony Hedges, emeritus Reader in Composition at Hull University.  This friendship, dating back to his university days, has fostered several new compositions for bassoon the most recent being ‘Three Humours’, which received its première in 2012 when it was broadcast by The Anemos Trio for BBC Radio 3.  Richard’s work in researching new and overlooked repertoire for the bassoon led to his being invited to adjudicate the Woodbridge prize for bassoon at the Royal Academy of Music in 2013.

Performing the Duet-Concertino has been a long held desire by both players, which was hatched many years ago when they were soloists in the Sinfonia Concertante for Clarinet and Bassoon by Franz Danzi.  With this performance, the HCO not only fulfils that long-held ambition but neatly complements last season’s performance of Strauss’ Oboe Concerto, which is closely allied to the Duet-Concertino.