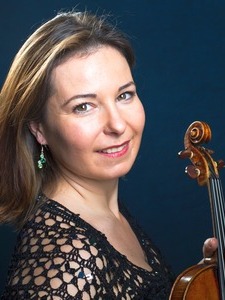 “...the big intensive sound that fills the whole concert hall and reaches straight through to the listener’s heart…”  Wiener Zeitung

Melina Mandozzi was born in Locarno, Switzerland, into a family of musicians.  She received her first violin lesson at the age of four from Suor Clara Lainati, later studying at the prestigious Yehudi Menuhin School in London.  From 1989 Melina studied in the virtuoso class of Professor Zachar Bron at the Musikhochschule Lübeck, where she was awarded both her Diploma, as well as her Konzertexamen with excellence.  From 2001, she took a two-year postgraduate course at the University of Music in Graz with Professor Boris Kushnir.

At the age of twelve she gave her debut at the Royal Festival Hall with the Royal Philharmonic Orchestra and has since been performing throughout Europe as well as in the USA, South America and Japan.

Melina Mandozzi plays on a violin by G.B.Guadagnini, made in Piacenza in 1742.