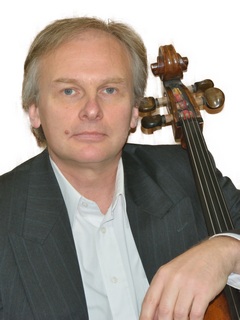 Mikhail Lezdkan studied at the Leningrad Conservatoire, and while still a student he won second prize in the Belgrade International Cello Competition in 1984.  After graduation he worked in a well-known chamber ensemble, the Soloists of Saint Petersburg.  In 1991 Mikhail moved to France where he led the cello section of the Lyon Opera Orchestra, and became artistic director of a chamber music ensemble in Lille.  With the violinist Vanessa Mae, in 1995 and 1996 Mikhail toured Asia, Australia, New Zealand and Europe.  Mikhail played in the Contemporary Music Festival, St Petersburg in 1987, giving the first performance in Russia of Messagesquisse for solo cello by Pierre Boulez.  In 2003 he gave the first European performance of the Cello Concerto by the Israeli composer Gil Shohat, in the Royal Concert Hall, Stockholm.

Mikhail is a committed chamber musician, and in recent years has appeared in chamber concerts across Southern England, featuring music from the standard repertoire for cello and piano and for piano trio (he is a member of the recently-formed Damira Piano Trio).  In the summer of 2018 he toured Japan for three weeks as part of a small chamber ensemble.  In 2019, he participated in a Festival in Brittany exploring in recitals and seminars the multi-faceted legacy of the Russian composer Rimsky-Korsakov.

Future plans include further appearances with the Damira Piano Trio, and in 2020 he will be playing the complete Beethoven Cello Sonatas at various venues.  Mikhail also has an extensive teaching practice, working with students of all ages and levels of experience.