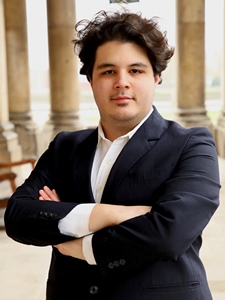 Christos Fountos was born in Nicosia, Cyprus in 1997, into a family of musicians.  He started his musical training at the age of 3 and at the age of 5 he began piano lessons under the tutelage of Miroslav Gospodinoff (who studied under two of Heinrich Neuhaus’ students).  At the age of fifteen, he was awarded the Piano Diploma (Ptychion) with Highest Distinction.  Two years later he was invited to perform Shostakovich’s Piano Concerto No. 2, as soloist in his debut with the Cyprus Symphony Orchestra.

At the age of 18, Christos started studying a BMus Piano Performance degree at Trinity Laban Conservatoire of Music and Dance in London, under the celebrated British pianist and teacher, Philip Fowke.  He has also had masterclasses and lessons with Sergio de Simone, Pascal Rogé, Pavel Nersessian, Martino Tirimo, Peter Donohoe and Georgia Alessandra Brustia among others.  Additionally, he has had lessons on harpsichord, organ, orchestration, conducting and jazz.

Christos regularly performs in concerts, playing solo piano repertoire, chamber music and vocal repertoire as accompanist.  He has formed “Duo Dithyrambico” together with Angelina Pavlou, performing repertoire for piano 4-hands and two pianos, including his own original arrangements of orchestral music.  Moreover, he has played the orchestral piano part in performances of Trinity Laban Symphony Orchestra, one of them being a side-by-side performance with the BBCSO at Maida Vale Studios.

Christos regularly participates in competitions; most recently he was awarded the first prize in the 75th Coulsdon & Purley Festival’s Piano Concerto Competition.  Additionally, he has received two Trinity Laban Prizes:  The Weingarten Prize for Piano and The Raymond Russell Prize for harpsichord.  In September 2019, he continued his studies at Trinity Laban for a master’s degree, with full scholarship.