The highlight of our final concert of the current season is Finzi’s cello concerto, performed by internationally celebrated cellist Raphael Wallfisch.  Raphael has previously performed both with Havant Symphony Orchestra and Havant Chamber Orchestra, but the last time was more than 30 years ago, and we are eagerly looking forward to this long-overdue opportunity to work with him again.  We are grateful to the Finzi Trust for helping to offset the additional expense of this special occasion.

The rest of our concert (Borodin and Tchaikovsky) will be more familiar to most people, and we expect it to be very enjoyable.  But even though many people enjoy classical music, our audience numbers remain small and need to improve significantly for the orchestras to remain financially viable in the long term.  It’s true that we can all hear and see high quality music performances through various electronic devices nowadays, but being immersed in the experience of a live performance adds another dimension to the enjoyment.  It also makes the event more enjoyable and worth while for the players if they can see a well-filled auditorium.

To give the people of Havant a taste of live instrumental music,  various groups of players from Havant Symphony Orchestra will be performing in Havant’s Meridian Centre from 2pm to 3pm on Saturday 30th June (one week before the concert, just after this newsletter is published).  This includes a string quartet (performing Mozart and some lighter items), a trio of flute, violin and cello, and various other items accompanied on the Meridian Centre’s baby grand piano.  Feel free to come along to listen, or to encourage potential audience members by handing out flyers and brochures and talking to them about the orchestra, and see if we can get some new audience this time!

As many of you know, Stella Scott (cello) missed the recent HCO concert to join an international amateur orchestra (BE Phil) at the Berlin Philharmonie, conducted by Sir Simon Rattle!  Stella’s thoughts on this fantastic experience are included as an extra page in this newsletter.

The pre-concert talk about the works in our concert will be given by our soloist Raphael Wallfisch who will be talking about the Finzi cello concerto.

And so to the last concert of our 2017/18 Season!  I hope you agree that's it’s been a good one, with some old favourites, as well as a number of more unusual works to, shall we say, intrigue and entertain you?  It’s certainly been interesting for the HSO players to tackle new works, which some of them haven’t played before.

Our solo work is to be the wonderfully evocative and melodious ’Cello Concerto by Gerald Finzi.  Sadly Finzi died at a relatively young age of leukaemia and, as he was finishing the Concerto, he knew that his ‘days were numbered’, which makes the piece all the more poignant and moving.  It is a particular favourite of mine and, even more so, for our brilliant soloist Raphael Wallfisch, who is regarded as one of the work’s leading interpreters.  He has also edited the solo ’cello part.

When I first conducted the Concerto it was still in manuscript form and littered with errors.  However, in more recent years a new edition, by Jeremy Dale Roberts, has been published by Boosey and Hawkes, which makes performing the piece considerably easier.  By a happy coincidence Jeremy Dale Roberts (JDR) taught me theory at the Royal College of Music.  He was a close friend of Vaughan Williams and died relatively recently.  I regret not seeing him in his latter years.  He was Head of Composition at the RCM and I liked him very much.

Our Symphony really requires very little introduction, as it’s absolutely central to the romantic orchestral repertoire and is about as well-known and highly regarded as any symphony can be.  It’s heard regularly on Classic FM, whether in single movements or in it's entirety.  One nice little memory I have of the work, and a direct link with the RCM, is that, as part of our course at the College, we had to transcribe for piano an orchestral piece.  I chose the slow movement of the Tchaikovsky 4 - and I think JDR was my teacher at the time.

We hope you enjoy the concert, as much as we have enjoyed preparing it.  Thank you for your continued support and do have a good Summer – after you have attended the HSO Concert ’though, of course!  JB

Having had two rhapsodic pieces to conduct in this season’s previous concerts, it’s been great fun having something a bit more fiery to get my teeth stuck into!  Much of the music for the Overture comes from Prince Igor’s Aria.  Never having conducted any Borodin before, but knowing the Polovtsian Dances as a listener, working on this piece with the orchestra has given me a strong desire to get to know more of his work!  I hope it has the same effect on you all as listeners.

Do you have a couple of hours a month to spare?  Could you spend it keeping track of HADOS’ income and expenditure?

Our Treasurer, Brian Terry, is retiring from the role after more years than we care to mention and we cannot really carry on without a replacement!

The Treasurer makes payments for us via our online CAF Bank account and keeps a spreadsheet of all our income and expenditure.  He or she needs to be a member of the Society because they must be elected to Committee and be a Trustee, so that means a playing member or Season Ticket Holder or someone else prepared to pay a subscription.

Attendance at the 7 committee meetings per year is obviously helpful but the odd absence can be tolerated!

It’s not a particularly onerous role and could give you an interesting insight into what goes on behind the scenes at HADOS.  Although Brian is stepping down from the treasurer role, he will still be in the orchestra and has said he will be happy to help hand over the role for as long as required.

For more information, please email treasurer.havantorchestras@gmail.com as soon as possible!

Auditions for our next student conductor will take place from 7.15pm to 9.45pm on Tuesday 10th July 2018 at St Joseph’s Church Hall in West Street, Havant.  Non-playing members (season ticket holders) are welcome to come and listen.

The AGM of the Havant and District Orchestral Society will be held at 7.00pm on Friday 7th September 2018 at St Faith’s Church Hall, The Pallant, Havant (now also known as The Pallant Centre).  All members of the Society (that is, playing members and season ticket holders) are invited to attend.

We need to fill places on the committee to replace members who are stepping down. Nominations for election may be sent to the Chairman in advance (with the names of candidate, proposer and seconder) or submitted at the meeting.

Changes to rail timetables mean that to allow Jonathan Butcher to get home at a reasonable time, HSO rehearsals for 2018-19 will now be from 7.00pm to 9.30pm. 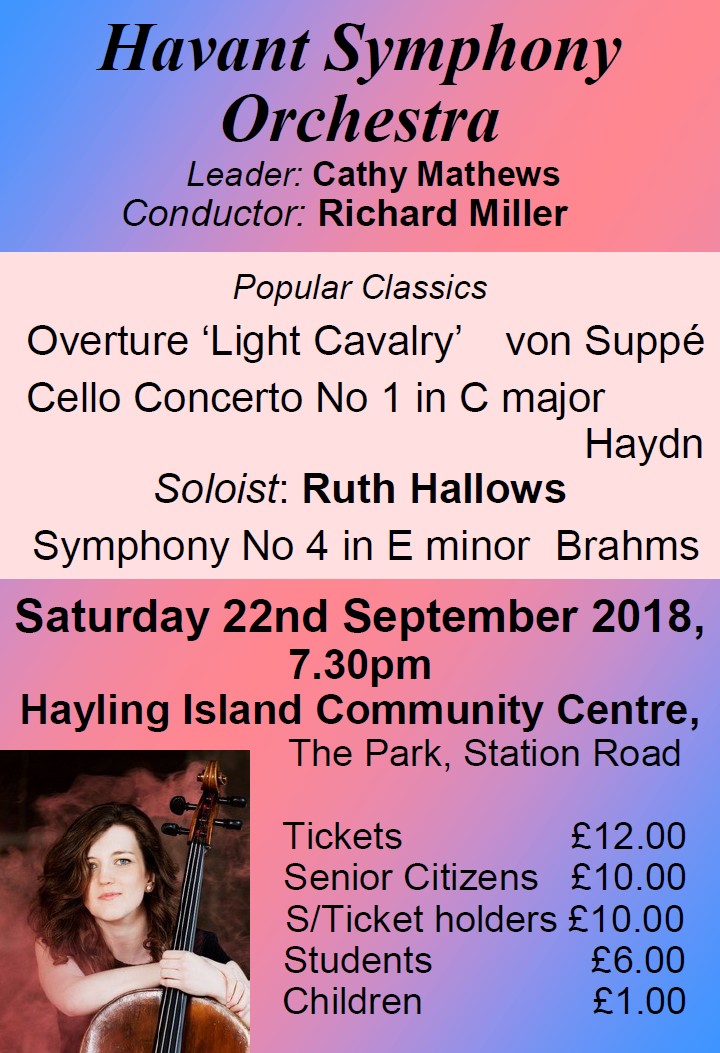 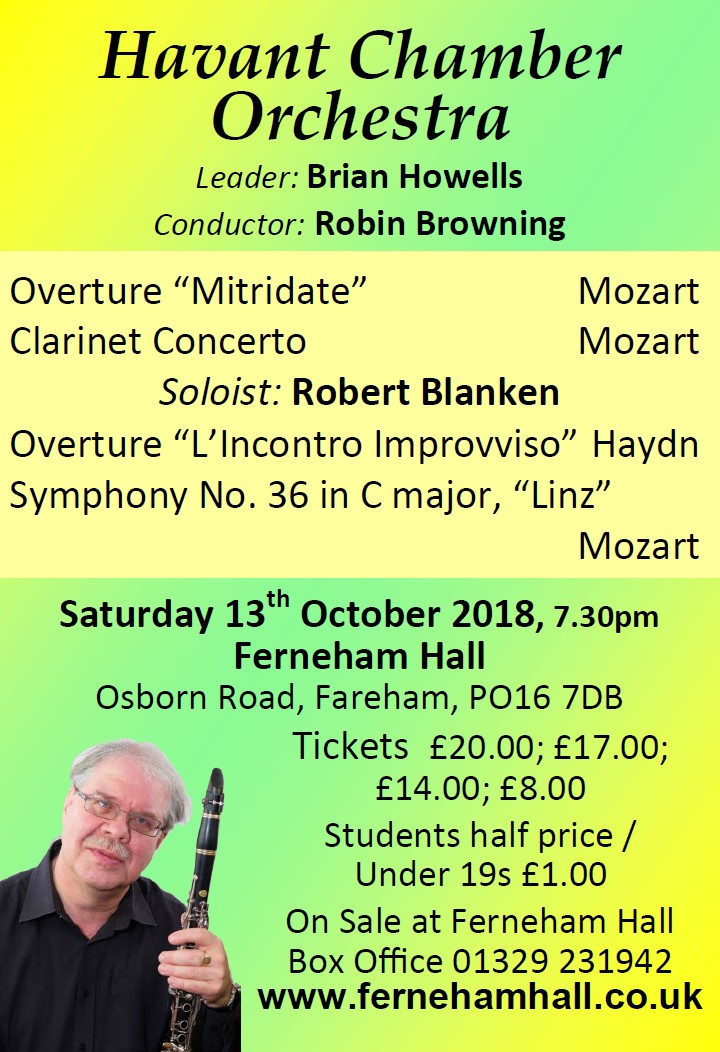 A visit to the Philharmonie in Berlin

In May I was very fortunate to be able to take part in an education project organized by the Berlin Philharmonic.  They were having an open day for the Philharmonie, their superb concert hall in Berlin, and the centrepiece was to be a performance by an orchestra of amateur musicians from all over the world, conducted by Sir Simon Rattle.

They invited applications including a short video and out of the 2000 submitted, I was one of the 101 people selected to take part.

We performed just one work, Brahms’ Symphony no 1, and we rehearsed 4 hours per day for 4 days prior to the concert!

The initial rehearsals were taken by the superb Stanley Dodds who is a 2nd violin in the Berlin Philharmonic but also conducts other orchestras.  He ‘prepared’ us for Simon, who took over for the last couple of rehearsals.

It was a fantastic experience on many levels:

It was such a positive, friendly, welcoming atmosphere.  Extremely well organized by Sabine Lorenz and her colleagues at the Philharmonie, and all in English (we are so lucky!), it was an experience that will stay with me for a very long time and which I hope I can share little bits of as much as possible.

Some stand-out comments from Sir Simon?

The concert, and a couple of short documentary films about the whole project, can be seen on the Berlin Philharmonic’s Digital Concert Hall website at:
https://www.digitalconcerthall.com/en/concert/51208
Enjoy!!