Havant Symphony Orchestra have a packed programme for Saturday’s concert.  Our new Bob Harding bursary holder Tom Griffin, from the Royal Marines School of Music, will be making his first appearance with the orchestra, conducting the Soirées Musicales.

The first half highlights three British composers.  Vaughan Williams’ overture ‘The Wasps’ was written for a production of the ancient Greek comedy by Aristophanes, although the powerful melodies are more reminiscent of traditional English folk song.  Britten’s ‘Soirées Musicales’ are colourful and playful arrangements of some songs and other short works by Rossini, originally put together as music for a documentary.

Walton’s Viola Concerto is a more substantial and adventurous work which will be less well known to our audience, and we are looking forward to performing it with Shiry Rashkovsky.  Unusually, it starts with a slow movement, with rich lyrical melodies that look back from the 20th century to the romantic era.  The second movement is a lively scherzo with fiery argumentative rhythms.  The last movement starts with a jovial but angular tune, introduced by the bassoon, which gradually grows in complexity and scale.  It finally broadens and relaxes into an introspective coda which refers back wistfully to the first movement.

The second half of the concert needs little introduction; Brahms took many years to finish his first symphony, but it immediately became a popular favourite, often described as ‘Beethoven’s tenth’.

The Oaklands School hall is an excellent venue for orchestral music and a major asset within the Havant district. We are sure that many more people would enjoy a local concert of live orchestral music, so please try to encourage someone new to come to this concert!

The pre-concert talk will be given by Alex Poulton, who is planning to talk about all of the works in the concert.

And so to the HSO's first concert of the 2016/17 Season and what a great opener, I hope you’ll agree!

Here are some personal reminiscences…

We start with RVW’s exquisite overture The Wasps. I believe this was the very first overture I ever conducted; in the parish church, where I was Head Chorister for many years. I return there frequently and remember the scene of my early conducting exploits. That programme also included the Britten Piano Concerto, I believe? I was nothing but ambitious in my late teens. Ha… My RVW connections continued a few years later, when I took over conducting the Surrey Philharmonic Orchestra, who gave most of their concerts in the Dorking Halls. Those of you who are RVW aficionados will, I dare say, know that the Dorking Halls is the home of the Leith Hill Music Festival, for whom ‘Uncle Ralph’ (as he was affectionately known) was the Festival Conductor for close on fifty years. His sister actually founded the Festival! There was a special podium, which still exists, that jutted out from the platform, and I felt rather special conducting on the very spot where RVW conducted on so many, many occasions – even more so when I was conducting the great man’s compositions. His Serenade to Music was a particular treat. Said podium was not only attractive (and clearly specially made for him) but it was very practical, allowing good sight lines between the orchestral Leader and the front desk of ’celli. So useful… The Wasps Overture incorporates a number of very attractive melodies, two of which fit together neatly at the end of the piece. A very standard trick, but always most effective. I have conducted The Wasps numerous times since, but it never loses its appeal.

Walton’s Viola Concerto – is really THE viola concerto! Others don’t get close. I first performed this with the Sevenoaks Symphony Orchestra in my early twenties with the then Principal Viola of the BBC Symphony Orchestra – John Couling – as soloist. He was a charming man and so helpful to me in that early period of my career.  I seem to remember we gave a rather good performance and John was especially complimentary. Back then seven/four bars seemed very modern and tricky. Nowadays they are pretty commonplace and, on the whole, easily absorbed.

My two memories of Brahms 1 are many hundreds of miles apart.

When a student at the Royal College of Music I had the privileged of being President of the Students’ Association in my fourth year. This entailed all sorts of special duties including entertaining a number of very special guests and VIPs – among them the Queen and the Queen Mother. On one occasion the RCM were celebrating the famous soprano Carrie Tubb’s 100th Birthday and it turned out, I believe, that both Brahms 1 and Parry’s wonderful choral work Blest Pair of Sirens were also 100. Sir David Willcocks – our Director – so loved historical connections. Anyway, on this occasion I was not playing in the orchestra but singing tenor in the choir – in those days known as Choral Class. Obviously the choir were only performing in the Parry. Incidentally, Parry was a previous and illustrious Director of the College. For this special concert Sir David had asked no lesser person than Sir Adrian Boult to conduct the Brahms. He was friends with Carrie T. and had probably worked with her on many occasions. Sir David conducted the Parry. Of course there really wasn’t anything about choral music that Sir David didn’t know and couldn't achieve with a group of singers. I learnt so much from him. Sorry – I digress. Well, as you can imagine, as a tenor in the choir I was in prime position to watch Sir Adrian’s every gesture and facial expression during the Brahms. It was amazing, and all with the minimum of effort and with great grace and dignity. He certainly knew how to shape and phrase Brahms. It was some lesson - and all for free!

Years later I had a similar experience, while studying at Tanglewood, the Boston Symphony Orchestra’s summer home and Summer School. Klaus Tennstedt was conducting the BSO and as students, known as Seminarians, we could watch as many rehearsals as we liked and, of course, we did. You couldn’t keep us away, particularly when the likes of Bernstein, Ozawa, Ormandy, Previn and, as I say, Tennstedt were on the podium. Tennstedt was so different to Boult. And had, understandably, a different approach but he was just as inspiring and committed. I shall never forget the way he started the famous tune in the last movement. Such poise!

Well – there’s my trip down memory lane. We can't promise you Boult or Tennstedt and even if we could I’d be out of a job. However, I think you are in for a great evening in December, so please join us and do bring a crowd. I am confident you won't be disappointed.  JB.

What a wonderfully delightful suite Benjamin Britten’s Soirées Musicales is for my first outing with the HSO.  Last year I was lucky enough to be tutored by acclaimed conductor Malcolm Binney and one of the pieces that he chose for me to work on was Britten’s Matinées Musicales so it is extra special for me to have the chance to work on its sister work with this fine orchestra.  Both suites are an entertaining selection of melodies, most of which you will surely recognise.  The majority of both suites were inspired by Gioachino Rossini’s compositions and a few of Britten’s realisations are very different to the original!  For example, the material used for the fifth movement of Soirées was originally a solemn religious choral work and yet Britten transforms it into a heart-racing Tarantella!

Being awarded the Bob Harding Bursary for Young Conductors this year is a wonderful opportunity for me to develop my conducting and rehearsal skills further by learning from Jonathan Butcher and the members of the orchestra. By means of a short introduction, I am a Royal Marines musician of thirteen years who’s currently serving at the Royal Navy Air Station near Yeovil where I am the Bandmaster of an amateur wind band. I’m very much looking forward to an exciting year of music-making with the HSO and meeting you all at our next concert. 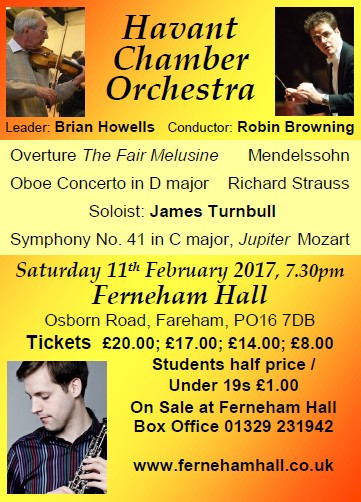