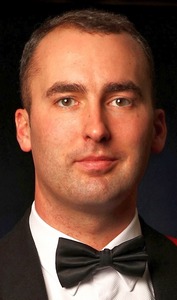 The Bob Harding Bursary holder for the 2016-2017 season is Tom Griffin.

After gaining his GCSEs, Tom joined the Royal Marines Band Service as a Solo Clarinettist.  During the past thirteen years he has travelled widely performing various genres of music in places such as Switzerland, Norway, Holland, Germany, Dubai, the United States and most notably New Zealand where he took part in a four-month exchange programme with their Navy band.

Tom completed his BMus(Hons) degree shortly before being deployed to Afghanistan in the Band Service's traditional military role as medical support in 2011 where he worked at the hospital in Camp Bastion.  His past conducting experience includes working with the Exmouth Light Orchestra and the Hatherleigh Silver Band where he was the Musical Director.

Tom is currently working near Yeovil as the Bandmaster of the volunteer band at the Royal Naval Air Station, Yeovilton and he’s delighted to have been awarded the Bob Harding Bursary for Young Conductors 2016/17.  Tom is very much looking forward to developing his conducting skills further by working with Jonathan Butcher and the Havant Symphony Orchestra in the upcoming concert season.