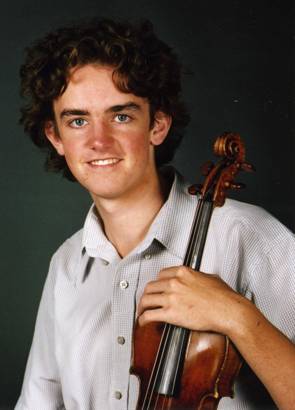 Born in New Zealand, Ben Baker began playing the violin at 3, and at 7 years old old he played with Nigel Kennedy who suggested that Ben apply to The Yehudi Menuhin School in England.  Ben was offered a scholarship and moved to England to take up his place when he was 8 years old.  Ben is now 19 and in his final year studying with Natasha Boyarsky.  He has been awarded a scholarship to the Royal College of Music, London starting in September 2009.

Ben’s musical highlights have included the opportunity to play many concertos including Mozart, Bruch, Tchaikovsky, Vaughan Williams and Mendelssohn with professional orchestras in England, Europe and New Zealand.  At 15, Ben played Mozart’s Sinfonia Concertante with the London Mozart Players in the presence of HRH Prince Edward.

In 2007 Ben won the Cathcart Concerto Award; the prize being to play with the Royal Philharmonic Concert Orchestra at the Royal Albert Hall.  The critic, Michael Darvell said of his performance, “At just 17 Ben is obviously destined for great things”.

The national radio station, Classic FM, awarded Ben their Next Big Thing prize in 2006 by an overwhelming listeners’ vote.  His solo debut album Arcadian Strings was the only privately recorded album in the competition.  Proceeds from Ben’s CD sales have been used for his ongoing support of sponsored children in Romania in an HIV orphanage and World Vision Ghana.