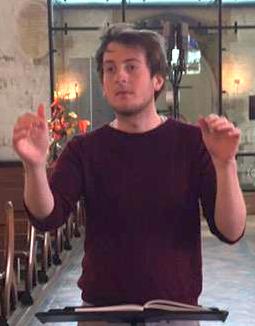 The Bob Harding Bursary holder for the 2015-2016 season is Joseph Beckhelling.

Joe Beckhelling enjoys conducting a number of Orchestras, Bands and Choirs in the South of England.  As well as obtaining the Assistant Conductorship with the HSO, he is the Principal Conductor of the Southampton University Symphonic Wind Orchestra and has recently finished working on Cantores Michaelis’ latest album ‘Christmas Carols 1500-2000’ as Assistant Conductor.

Whilst at the University of Southampton, from which he has recently graduated, Joe was the Assistant Conductor of the Southampton University Symphony Orchestra, studying under Principal Conductor Robin Browning.  Joe also has a passion for community music, and loves to encourage people who don t have as many opportunities to perform, to get together and make music.  The ‘University of Southampton Voices’, ‘SUSingers’ and ‘SuStrings’ are all examples of the community music work he has been involved in.