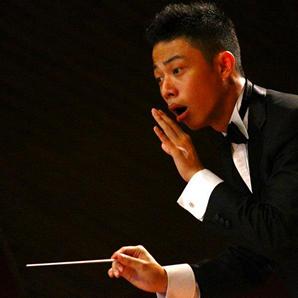 Born in Singapore (1990), Ignatius joined the Singapore Armed Forces (SAF) Central Band at the age of 21 and served as the Associate Principal Euphonium. In 2012, he was selected by the SAF Music Board for the Director of Music position and was subsequently awarded a full scholarship to study at the Royal Marines School of Music in Portsmouth, United Kingdom.  During this time, he enjoyed the opportunity to study with the likes of Dr. Elizabeth Le Grove, Malcolm Binney, Paul Patterson, Barrie Forgie and Major Jon Ridley.

Ignatius was very successful in his studies and was awarded the Distinguished Star and the Baldwin’s Award for Best Conductor.  He later became the youngest candidate to complete the Bandmasters’ Course, which he passed with Distinction and also clinched the Conducting Prize.  During this time, he also attained several diploma qualifications including the LRSM (Conducting) and AMusTCL.

He has attended several international conducting masterclasses with Douglas Bostock, Tim Reynish, Bjørn Sagstad, Mark Heron and Russell Cowieson.  He also had the opportunity to study brass band conducting with Dr. Nicholas Childs, which culminated in a rare opportunity to conduct the world famous Black Dyke Band.  In August 2014, Ignatius was invited to assist Dr. Childs at the International Brass Band Summer School in Swansea, where he worked with several world-class brass artistes and also conducted at various performances.  During this time, he also led a conducting class under the guidance of Dr. Childs.

From late September, Ignatius will be undertaking conducting studies at the Royal Northern College of Music as an associate student.  He will then complete his training by taking the Royal Marines Director of Music Qualification Examinations in May 2015.

In Singapore, Ignatius has served as Associate Conductor in various bands under his mentor Tan Beng Wee, to whom he gratefully credits for his development as a young conductor.  He is delighted to receive the Bob Harding Bursary for Young Conductors 2014/15, and is relishing the opportunity to work with Jonathan Butcher and the Havant Symphony Orchestra in the upcoming concert season.