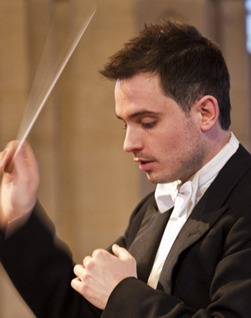 Born in Pembrokeshire, Robert read music at Royal Holloway, University of London where he studied piano with James Kirby, violin with Alex Wood, and conducting with Levon Parikian.  Following a period as a teacher he was awarded a full scholarship, funded by the H R Taylor Trust, to the Royal College of Music.  At the RCM he studied conducting with Peter Stark and Robin O’Neill and directed performances with orchestras and chamber ensembles.

Robert is passionate about the education of young musicians and along with the NCO and RCMJD, he conducts at Twyford C of E High School, Ealing Schools Symphony Orchestra and teaches at Pangbourne College.  From September Robert will conduct the orchestra at Wimbledon High School.

When time allows Robert works as a keyboard player, performing mainly as a chamber musician and accompanist.  He spent six years as accompanist for Pangbourne Choral Society and has been the orchestral pianist for the European Union Youth Orchestra, with whom he toured Europe in 2011.  At the RCM he studied Harpsichord with Terence Charlston.