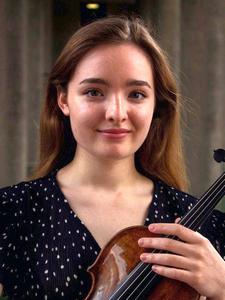 Mira Marton started playing the violin at the age of seven in Warsaw.  Having spent ten years in primary and secondary music schools in Poland, with teachers Anna Rzymyszkiewicz and Andrzej Gebski, in 2016 she gained a place at the prestigious Yehudi Menuhin School under the tutelage of Lutsia Ibragimova.  She now studies with Maciej Rakowski at the Royal College of Music, where she is generously supported by the Russell Race Scholarship.

Over the years, she has also taken part in many prestigious music courses, among others, Morningside Music Bridge, Beijing, International Music Academy Stringtime NiederRhein in Goch, Germany, and masterclasses given by leading violinists including Noah Bendix-Balgley, Boris Garlitsky, Roman Simovic and Gordan Nikolitch.  Most recently, chosen as one of four students at the Royal College of Music, she was invited to participate in a masterclass given by Maxim Vengerov in which she performed and worked on the first movement of the Sibelius Violin Concerto.

As a keen chamber musician, the young violinist has participated in many competitions in her native country, winning Second Prizes at the National Chamber Auditions ‘CEA’ as well as the Second Chamber Music Forum in Warsaw.  Her 2018 Wigmore performance of Rachmaninov’s Trio Elegiaque impressed audiences and critics alike, with Ates Orga writing for Classical Source: ‘Honest chamber music-making, nuanced in old-world fragrances.’