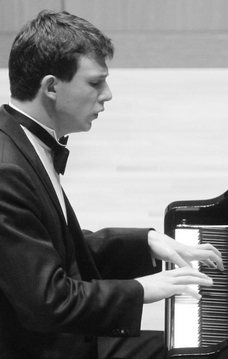 Alexander Karpeyev was born deep in the Heart of Russia, in Saratov on the Volga, 16 hours by train from Moscow.  He began to play piano at the age of 7 studying at the Children’s Music School in Saratov, and afterwards at the Musical-Aesthetic Lyceum in Engels.  In 2000 he entered the Moscow State Tchaikovsky Conservatory where he studied with the distinguished Professors Emmanuel Monaszon, Alexander Mndoyants and Vera Gornostayeva.

He won a scholarship to study with Joan Havill at the Guildhall of Music & Drama where he currently holds a Music Fellowship.  He has performed in the some of the most prestigious venues in the UK, including the Barbican, Cadogan, Wigmore and Queen Elizabeth Halls in London, and the Bridgewater Hall in Manchester, where he has been asked to return for the third time.  Internationally he has given recitals in Russia, Ukraine, Poland, Switzerland, Japan, Greece and Belgium.  He has been featured on the Performance Channel of Sky Television playing Beethoven’s Sonata Op 110 and on BBC Radio 3 playing Scarlatti Sonatas.

Click on the title in the playlist to start the required extract.

This requires the Adobe Flash Player; if it is not yet installed, your browser should try to install it automatically, in which case you may need to permit the installation by responding to a prompt or clicking on a bar at the top of the browser window (or both).

The Flash application being used in this case is Jerome Wijering’s JW Player, which can play MP3 files from a predefined playlist.